IL COLOSSEO DESCRIPTION
Sure, this is a given when you’re in Rome, but there’s more to the Colosseum than cool panorama pictures and tales of brave gladiators. No other place embodies the best and the worst of Rome so perfectly. This architectural marvel, featuring multiple innovations and incredible feats of engineering, was made to serve the most cruel blood sport. As you walk through it, imagine 50,000 to 80,000 cheering Romans gambling, drinking, and eating under the velarium, a large sail that provided shade for the spectators. The Colosseum came alive with theatrical stage sets, exotic animals, public executions, and, of course, gladiators.

HISTORY
The Colosseum’s historic name is the Flavian Amphitheater 70 – 80 CE. This, the most monumental amphitheatre in the Roman empire, was built by Vespasian and Titus over an artificial lake created by Nero. The Flavian dynasty (Vespasian was the first of this family) desired to symbolically return Rome to the people after the extravagant excesses of Nero. Vespasian’s motivations were political⏤remove a hedonistic, Nero indulgence, and replace it with an arena of free bloodsport games for the people. While appreciating the beauty of the Colosseum it is important to remember that its raison d’etre was political⏤please the people by providing them the most savage display of violence. Cue Russell Crowe screaming “Are you not entertained?”

The Colosseum was begun by Vespasian in 70 CE and completed by Titus in 79 CE. It is the largest amphitheater in the world. It is estimated to consist of 100,000 cubic meters of travertine, which was brought from Tibur (Tivoli). Scholars have counted an estimated 300 tons of iron clamps holding the stone blocks together. These clamps would have been where the present day holes are. The Flavian Amphitheater could hold an estimated 50,000-80,000 people.

Perhaps the greatest Roman invention of all is what enabled the Colosseo to be: concrete.

“We are confronted visually with a series of squares within the framing of the arches. These are not accidents, but details of design, which reflect the architect’s preoccupation with principles of number, and provide the viewer (however unconscious he or she may be) with a steady and harmonious rhythm in the façade. The ordered beauty and formal regularity of the Colosseum’s exterior is created by three storeys of superimposed arches with engaged (ie semi-circular) columns. These columns are of different orders on each storey (Tuscan at the bottom, then Ionic, with Corinthian columns in the third storey). The fourth higher blind storey is punctuated by pilasters, decorated with Corinthian capitals.” Keith Hopkins, 2011 http://www.bbc.co.uk/history/ancient/romans/colosseum_01.shtml 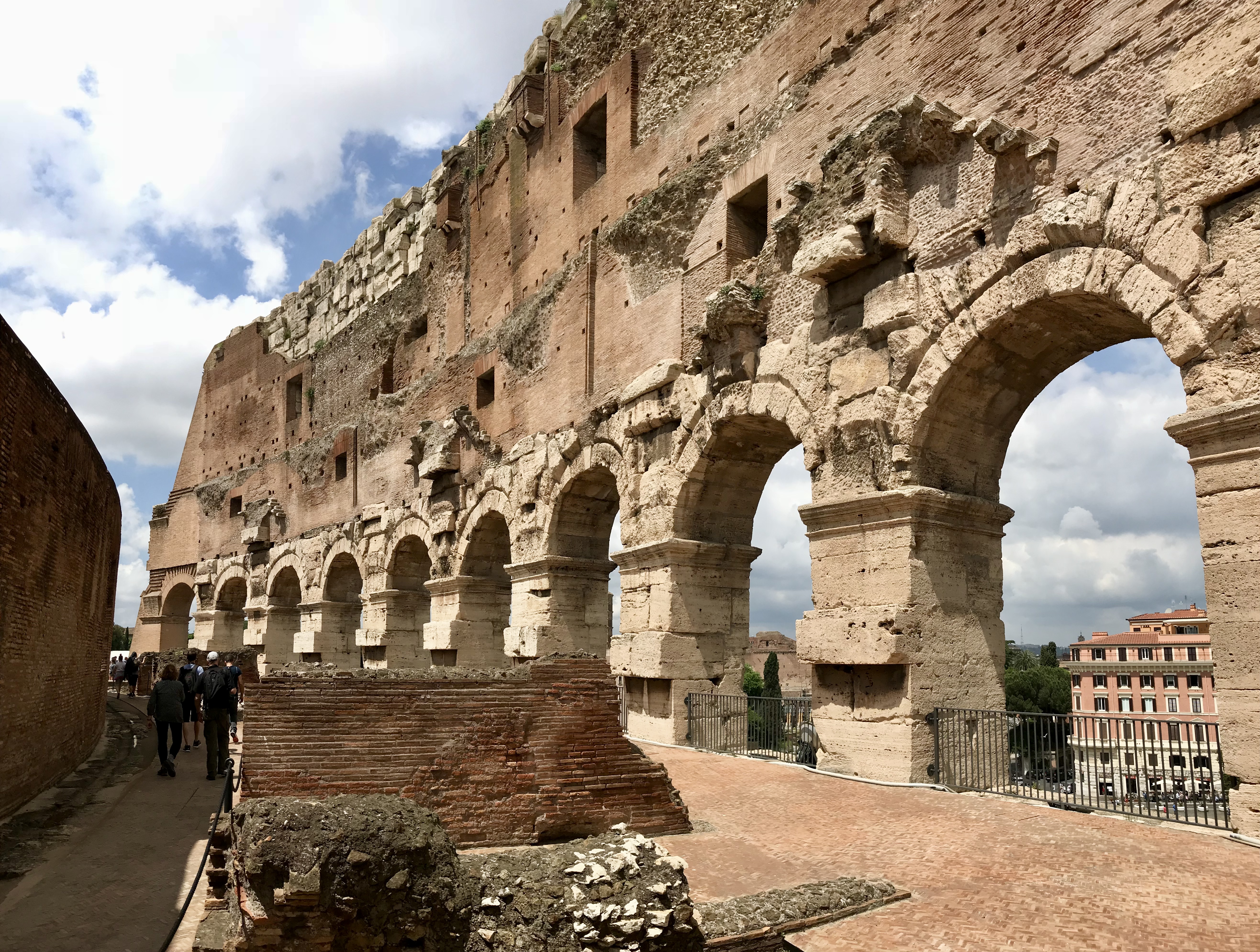 “Inside, the theatre must have been even more impressive when the three tiers of seats were filled with all sections of the populace. Encircling the arena was a wide marble terrace (podium) protected by a wall within which were the prestigious ring-side seats or boxes from where the Emperor and other dignitaries would watch the events. Beyond this area, marble seats were divided into zones: those for richer private citizens, middle-class citizens, slaves and foreigners and finally wooden seats and standing room in the flat-roofed colonnade on the top tier reserved for women and the poor. On top of this roof platform sailors were employed to manage the large awning (velarium) which protected the spectators from rain or provided shade on hot days.” Mark Cartwright, 2012

This marble block records two epigraphs, including the inaugurations of the Flavian Amphitheater. 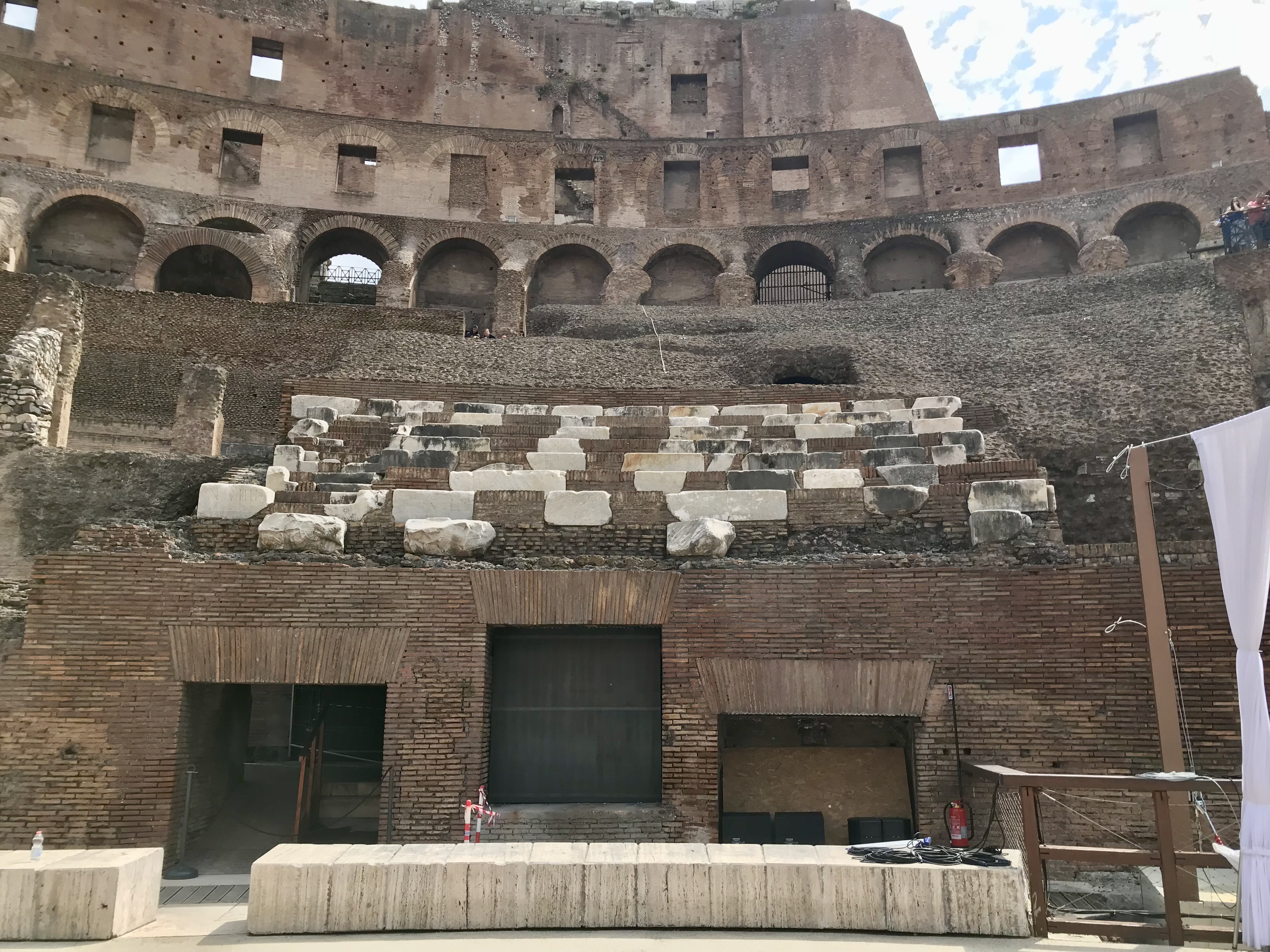 COLOSSEO THE GAMES
“In the morning they throw men to the lions and the bears; at noon, they throw them to the spectators.  The spectators demand that the slayer shall face the man who is to slay him in his turn; and they always reserve the latest conqueror for another butchering.  The outcome of every fight is death, and the means are fire and sword.” Seneca, Moral Epistles

COLOSSEO LEGACY
“I think one of the most exciting things about visiting these monuments – like the Parthenon, or the Colosseum, etc. – is in going to see what our predecessors saw, but differently. I think the buzz you get from going to, say, the Colosseum is not just: ‘Oh my goodness, this is where gladiators fought and bled their guts out on the sand!’ But also: ‘This is where Byron came.’ And: ‘This is where Henry James came.’ There’s a sense of revisiting the recent as well as the remote past – and wondering, ‘Does it look the same to me as it did to Byron?’ Is it oppressive to be seeing through the eyes of these other people – or is that actually a wonderful enjoyment of historical ‘thickness’?” Mary Beard, 2007http://www.bldgblog.com/2007/09/the-wonders-of-the-world-an-interview-with-mary-beard-pt-1/