HISTORY
“The Louvre ceased to be a royal residence when Louis XIV moved his court to Versailles in 1682. The idea of using the Louvre as a public museum originated in the 18th century. The comte d’Angiviller helped build and plan the Grande Galerie and continued to acquire major works of art. In 1793 the revolutionary government opened to the public the Musée Central des Arts in the Grande Galerie. Under Napoleon the Cour Carrée and a wing on the north along the rue de Rivoli were begun. In the 19th century two major wings, their galleries and pavilions extending west, were completed, and Napoleon III was responsible for the exhibition that opened them. The completed Louvre was a vast complex of buildings forming two main quadrilaterals and enclosing two large courtyards.” Encyclopædia Britannica

The Louvre was established as a public museum by the French Revolutionary Assembly in 1792.

LECTURE NOTES
The following selection of artworks is made to relate to the curriculum of France Study Abroad: Art, War, and Human Rights of the FIU Honors College

“Standing at the top of the Daru staircase, The Winged Victory of Samothrace is a timeless icon of Western art. The monument was found on the island of Samothrace, in the sanctuary of the ‘Great Gods’ to whom people prayed for protection from the dangers of the sea. The figure, spectacularly placed in a rock niche high above the sanctuary, was designed to be seen in three-quarter view from the left – a view which highlights the billowing cloak and clinging ‘wet drapery’. The wings, the warship, the sanctuary… all point to the goddess Nike, the messenger of victory.” Musée du Louvre

“Perhaps the gentleness of her gaze and the slant of her hips would in any case have distinguished her from other sculpted goddesses… but this particular Venus carved out a reputation for herself as soon as she entered the Louvre. The statue was found on the Greek island of Melos (or Milos, as it is known today) and presented to King Louis XVIII, who gave it to the Louvre in 1821.” Musée du Louvre

The Venus de Milo is half nude and in contrapposto, “the posture of a sculpted figure standing at rest with weight shifted on to one leg…which displays the human body as a self-contained static system, in balance in the pose itself but visibly arrested and therefore implying past and future movement.” Oxford Art Online

The naturalism captured by the Venus’ contrapposto in combination with her nudity are characteristics that vanished from Western European art after the fall of Rome in the 400s. Large-scale female nudes that celebrate beauty and sexuality do not reappear in Western Europe until the Renaissance in the 1400s.

Giotto’s painting signals in two main ways the beginning of the Renaissance. Although the subject of The Sermon of the Birds is spiritual in nature, the representations of the subject is based on a close observation of the natural world. The leaves on the tree and detailed representation of different species of birds reveals to us that Giotto is turning away from a solely conceptual representation of reality and embracing a study of nature.

In addition, Francis begins to advocate for Catholics to care for all of God’s creation-a beginning of environmental awareness.

“Leonardo da Vinci must have particularly treasured the Mona Lisa, as he never parted with her. She was given star status as soon she arrived in the Louvre… The painting’s special appeal lies in its technical excellence, the sitter’s famous smile, the fantasy background landscape and the sfumato technique that envelops the figure in a misty haze.” Musée du Louvre

MADONNA WITH JOHN THE BAPTIST BY RAPHAEL, 1508 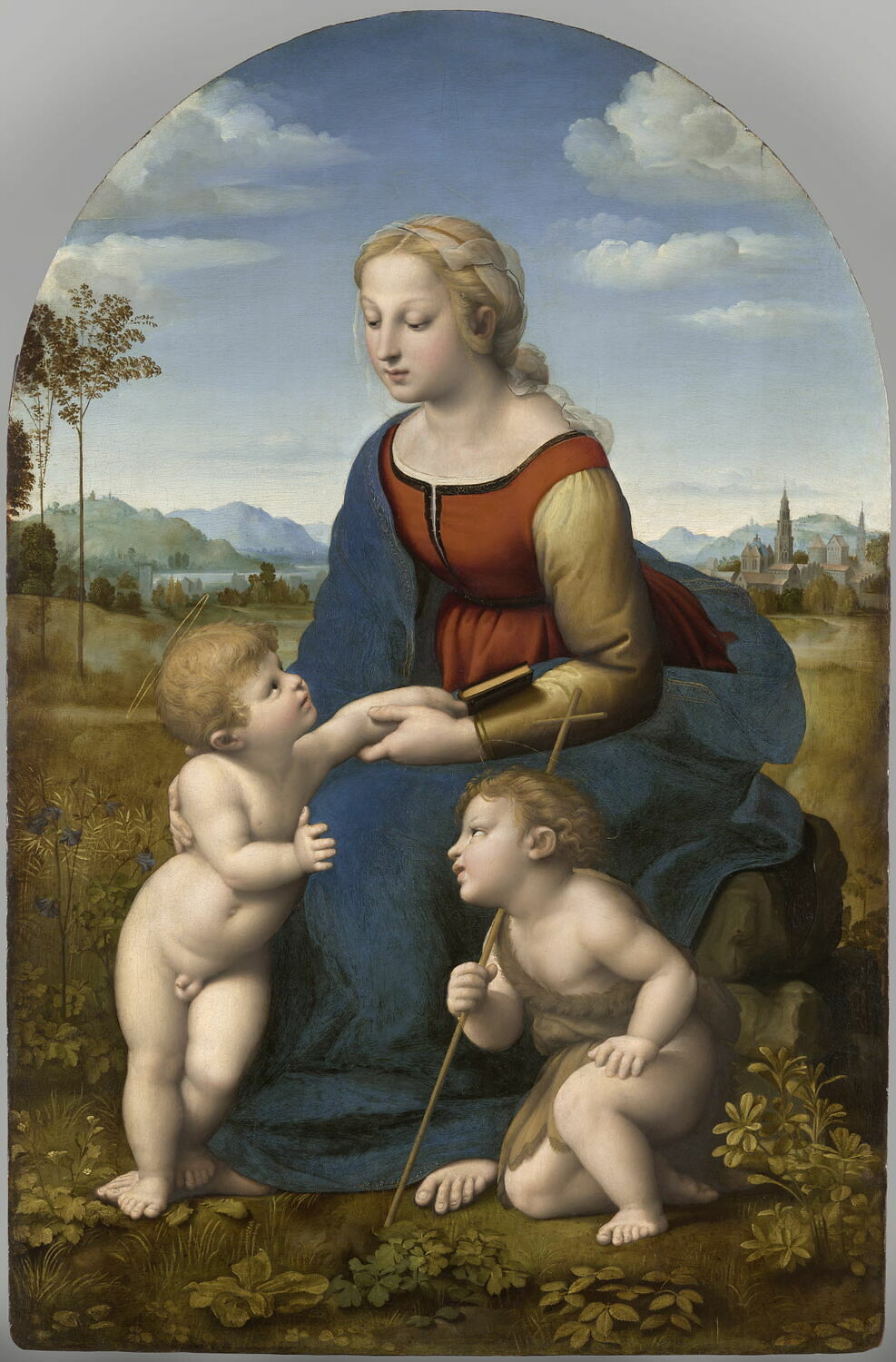 No artist better embodies objectified beauty than Raphael. Everything is idealized in this painting, and nothing is questioned. It is the embodiment of the Renaissance notion of divine beauty and perfection.

THE DEATH OF THE VIRGIN BY CARAVAGGIO, 1606

Only a century later, Caravaggio will create a seismic earthquake in art by introducing a visual, if not conceptual, realism. Although the subjects of Caravaggio’s paintings are still religious, the manner of their representation is not. In the painting, the Virgin appears so lifeless that a rumor spread that Caravaggio had used a downed prostitute as the model for the dead virgin.

THE OATH OF THE HORATII BY JACQUES-LOUIS DAVID

CORONATION OF NAPOLEON BY JACQUES-LOUIS DAVID

“Napoleon I reportedly exclaimed ‘One can walk through this painting!’ when he saw Jacques-Louis David’s depiction of his coronation ceremony. At six metres high and almost ten metres wide it is certainly an impressive work, giving the viewer a sense of actually attending the ceremony.” Musée du Louvre

It can be argued that nothing embodies the French Revolutions transition from Republic to Empire than the two paintings above by David. The Oath of the Horatii is call to civic principle and sacrifice. The Coronation of Napoleon is a return to art serving the state, further legitimizing and reinforcing the authority of the state.

THE RAFT OF THE MEDUSA BY THEODORE GERICAULT, 1819 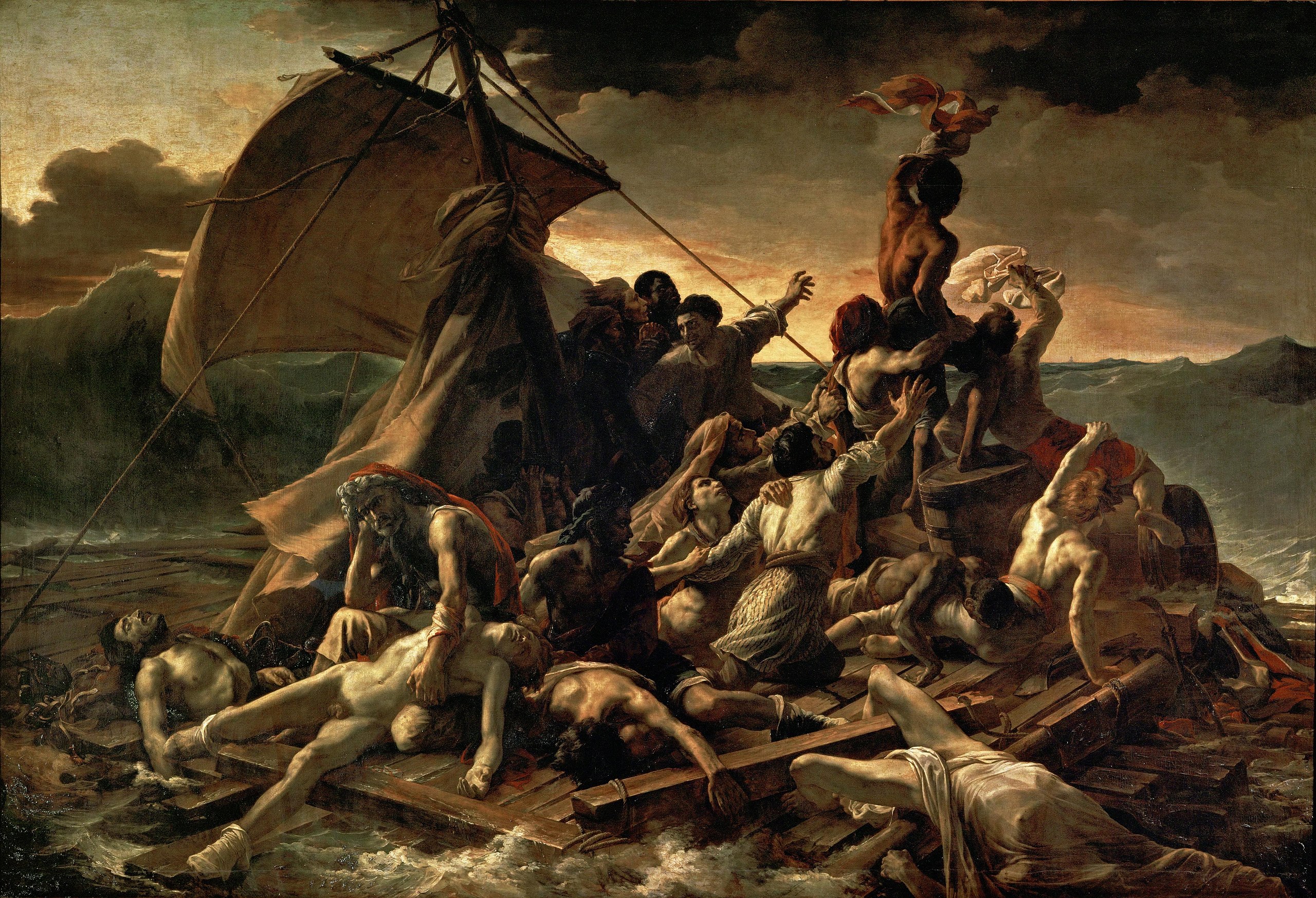 “At the Salon of 1819, Théodore Géricault presented his huge painting The Raft of the Medusa, a dramatic scene illustrating the recent wreck of a French ship – an event that had shocked the public. One hundred and fifty people drifted for thirteen days on a makeshift raft, falling prey to thirst, starvation, disease and cannibalism. Only fifteen survived to tell the tale. The pyramidal composition and precision of the drawing are classical in inspiration, but Géricault chose to cast a cold and sickly light on the figures of the sick and the dead, heaped together on their precarious raft. The artist spent eight months on his painting, meeting survivors, building models, and visiting morgues and hospitals to observe the dead and dying. The harsh realism of the result divided critics, who were either fascinated or repelled. The Raft of the Medusa entered the Louvre in 1824, shortly after the painter’s death.” Musée du Louvre

“Unusually for his period, Géricault began to work on this huge painting without having been commissioned. The resulting composition was a history painting, but based on a recent event rather than a ‘prestigious’ historical subject. The figures in the scene are not mythological heroes or brave warriors, but victims of a shipwreck, forced to resort to cannibalism to survive. The painter chose the bleakest moment, when they saw the ship that would eventually rescue them sailing away in the distance. This painting, first exhibited in 1819, was more than just a depiction of a tragedy. After the fall of the First Empire in 1815, the Bourbon kings had returned to power and the shipwreck discredited the newly restored monarchy: the captain of the Medusa had obtained his position on the strength of his connections with power rather than his competence; in fact, he had not sailed at all in the past twenty years! Unable to prevent the ship from running aground, he left part of his crew to drift on a makeshift raft.” Musée du Louvre

“Delacroix is best known today for this painting. It was inspired by the ‘Three Glorious Days’ of the July 1830 Revolution when the people of Paris rose up against King Charles X. The Parisians are depicted breaking through a barricade. The female figure at the top of the composition – part classical goddess, part woman of the people – urges the crowd forward and waves the tricolour flag. She is presented as a symbol of Liberty. Delacroix deliberately used the colours blue, white and red in combination several times in his painting: the French flag, a symbol of the 1789 Revolution then of the Empire, was banned when the Monarchy returned to power between 1815 and 1830. This famous allegorical/historical painting, often referenced in art and advertising, stands as a symbol of liberty and freedom fights.” Musée du Louvre