DESCRIPTION
“Touch, taste, smell, hearing and sight… These six tapestries, woven in around 1500, represent the five senses against a detailed red background. The remaining sixth sense, explained only by the inscription “À mon seul désir” (To my only desire), has inspired countless theories. Without excluding a possible meaning in the register of courtly love, it could be a reference to free will: the woman with her decorative headdress and refined clothing, renouncing temporal pleasures. These “millefleurs” (“thousand flowers”) tapestries are characterized by an abundance of flora, including flowers, orange trees, pines, hollies and oaks, and are inhabited by a peaceable bestiary (a monkey, dogs, rabbits and a heron).  In this idyllic natural setting conducive to contemplation, the unicorn by turns a participant and a simple spectator. Accompanied by a lion, it sports the coat of arms of the Le Viste family in every scene.” Musée de Cluny

THE TAPESTRIES OF THE LADY AND THE UNICORN
The order of the artworks on this page follows the manner in which they are displayed in the Musée de Cluny.

“The lady stands with her right hand firmly holding up the pennant and her left hand slightly brushing the unicorn’s horn. This tapestry shows several unique oddities. The unicorn looks smaller than in the other tapestries and the lion has a number of striking features, such as bulging eyes, a wide mouth and pointed ears. Among the animals in the background, two monkeys held captive can be spotted, as well as a wolf, a panther and a cheetah, all collared. The lady’s hair hangs loose ands is held with a diadem. She wears a blue velvet dress lined with ermine, highlighted with goldsmith work and large gold embroidered fabrics named orphreys.” Musée de Cluny 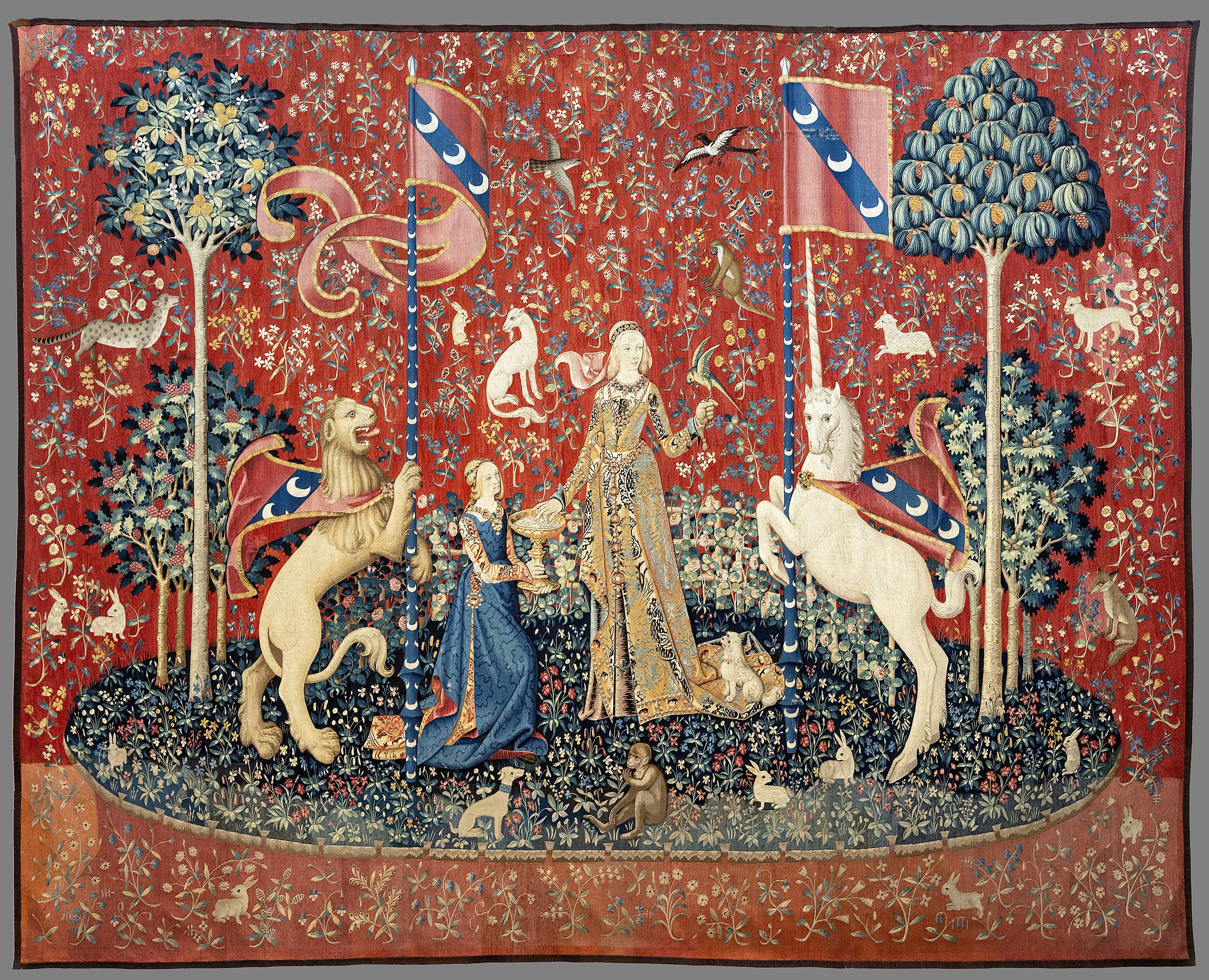 “The lady delicately grasps a sweet from a bowl held by her lady companion to feed the parrot on her gloved hand. In front of her, a monkey is eating a fruit thus giving the picture its meaning. The ample and harmonious composition revolves around the triangle formed by the two women. In the background, the fence covered in roses adds more depth and encloses the scene. The calm gestures of the young women stand in sharp contrast with the lively movements of the lion and the unicorn, dressed in armoured capes which look like they are floating in the wind. Several animals inhabit The Mille Fleur background including a hornless young unicorn. The garments and adornments stand out with details like laced openings on the Lady’s dress and her companion’ s sleeves and the vegetal ornaments on the jewelry, like flowers on the necklaces, headbands and hairnets, and the pomegranate on the Lady’s pendant belt.” Musée de Cluny 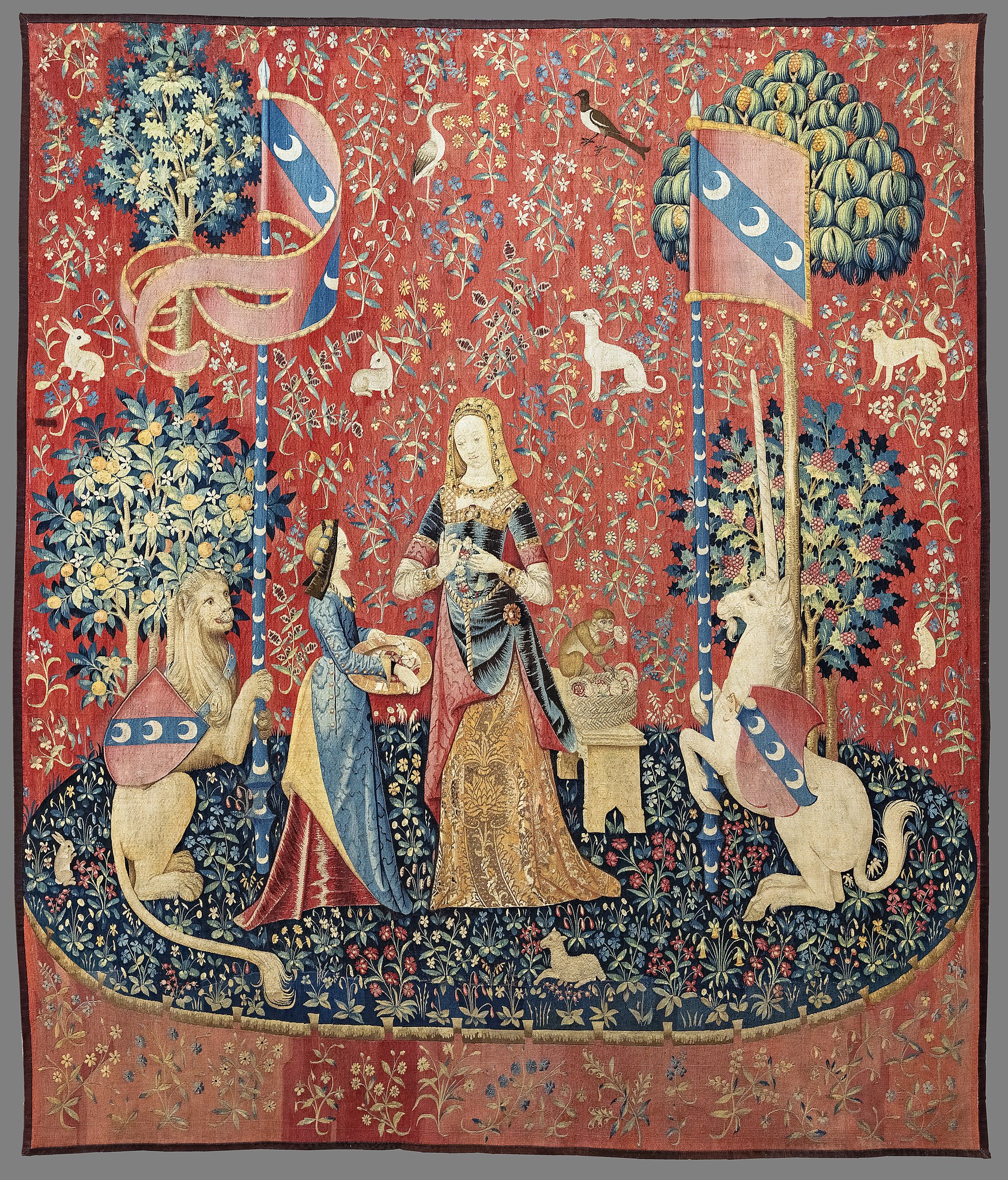 “The Lady is making a wreath of flowers with the carnations on a tray presented by the lady companion. A monkey in the background is smelling a rose, thus reinforcing the allegory. The lion and the unicorn stand still, the former wearing a shield and the latter a targe. The Lady and the lady companion’s garments are pulled up and one can see their undergarment called the cotte. The Lady’s hair is almost entirely covered by a short headdress divided with rows of pearls and bordered with gems and pearls. The lady companion’s hair is styled on the sides with locks held by ribbons and is only covered with a short band.” Musée de Cluny

“The Lady plays a portative organ which bellows are operated by the lady companion. The instrument is placed on an oriental rug and its posts are decorated with a unicorn and a lion. The composition is quite narrow, with the banners hiding the trees in front of which they are placed. The front of the unicorn is the only visible part and is slightly out of proportion. The lady is absorbed in her music. She wears a blue dress with a low-cut surcot made with a precious fabric adorned with motifs of pomegranate similar to the dresses in the other tapestries. Her hair is braided on the sides of her head and styled in an aigrette. The lady companion wears a simpler short veil.” Musée de Cluny

“The lady is seated and strokes the unicorn with her left hand. The front legs of the unicorn rest on the lady’s lap and it gazes at itself in the mirror – a precious piece of gold work – where the reflection it sees appears to be not his. As in the “Touch” tapestry, the unicorn plays an active role in the allegory instead of simply bearing coats of arms. The pyramid-shaped composition is framed by two low trees as if to direct the focus on the central scene. The only pennant is held by the lion which seems to look the other way. The aigrette headdress is similar to the one in the “Hearing” tapestry. In the background a lion cub, a dog and a rabbit also seem to take part to the looking game.” Musée de Cluny

“In front of a tent kept open by the lion and the unicorn, which simultaneously hold onto the pennants, a casket is presented by the lady companion. Does the lady pick a jewel or does she put back a necklace which is strikingly similar to the one she wears in the “Taste” tapestry ? Regardless of the answer, she already selected the pieces she has on her with spiral motifs, pearls and fleurettes (small flowers). The composition is again pyramid-shaped and very ample and revolves around a group complete with a small dog which already appeared in the “Taste” tapestry. Here the aigrette headdress has been passed to the lady companion. The motto written at the top of the tent not only gives the tapestry its name, but has also elicited a number of commentaries and speculations. This sixth piece is said to illustrate a “sixth sense” closest to the soul or to the world of the mind which according to the theory developed in the work of Jean Gerson in the early 15th century may be the Heart itself.” Musée de Cluny

The Lady and the Unicorn appeared in Harry Potter.

Medieval thought accepted simultaneous complementary explanations so it is possible that these allegories had other, more down-to-earth meanings. The Heart was indeed the origin of moral life as well as human love and carnal desire altogether. “The Lady and the Unicorn” appear like it belongs to a literary tradition illustrated by the following verses of the poet Charles d’Orléans (1394-1465):

Of loyal heart, content with joy
My mistress, my only desire
More than any other, I wish to serve you
No matter where I am.

It would also be limitative to look for the meaning of the unicorn only through its role as a mere bearer of pennants and coats of arms. A well-known symbol of chastity, the unicorn, which main attribute also has an obvious sexual connotation was regarded as a particularly ambivalent creature.” Musée de Cluny