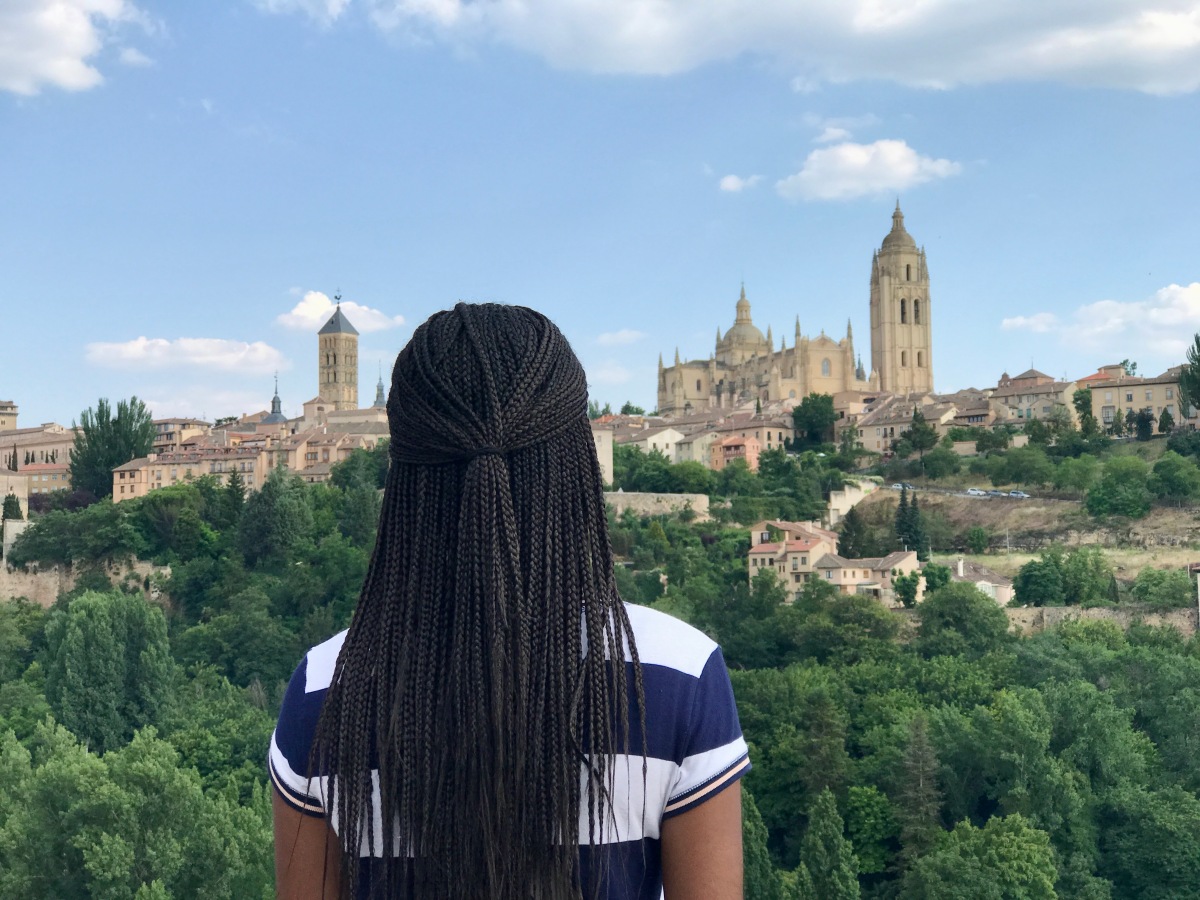 This timeline of the history of España is adapted from the Official website of the president of the Government of Spain and the Council of Ministers. It is posted here for educational purposes only. Prof Bailly changed the names from their English versions to the original Spanish (ex: Charles III to Carlos III) and added a few dates relevant to España: Ida y Vuelta

800,000 BCE
“Based on the findings at Atapuerca (Burgos province), estimated to be around 800,000 years old, the presence of hominids on the Iberian Peninsula dates back to the Lower Palaeolithic period. Experts are still debating the origin of these early settlers, who may have entered the peninsula directly from Africa via the Straits of Gibraltar, but more likely arrived by crossing over the Pyrenees.” La Moncloa

Spain before the Romans

1,200-800 B. C. Indo-Europeans, Phoenicians and Greeks invade the Iberian Peninsula

1230 Kingdom of Castile and Leon

1492 Conquest of Granada, Columbus’ discovery of America and the publication of the first Spanish grammar text (Gramática Castellana)

01 November 1478
Pope Sixtus IV issues the Bull Exigit Sinceras Devotionis Affectus which starts the Spanish Inquisition. The targets of the Spanish Inquisition are Jews that have converted to Catholicism.
“We learn that in various cities, sections and regions of the Spanish Kingdoms, many of those who of their own accord were born anew in Christ in the sacred waters of Baptism, while continuing to comport themselves externally as Christians, yet have secretly adopted or returned to the religious observances and customs of the Jews, and are living according to the principles and ordinances of Judaical superstition and falsehood, thus falling away from the true orthodox Faith, its worship, and belief in its doctrines.” Pope Sixtus IV

02 January 1492
King Boabdil of the Nasrid kingdom of Granada surrenders to Ferdinand and Isabella.

31 March 1492
The Alhambra Decree expelled all Jews from España. It was signed the Hall of the Ambassadors in the Alhambra.
“Ferdinand and Isabella promulgated a decree ordering the expulsion of Jews from all their kingdoms. Jewish subjects were given until July 31 of the same year to choose between accepting baptism and leaving the country definitively. Although the decree allowed them to take all their possessions with them, land-holdings, of course, had to be sold, and gold, silver and coined money were forfeit. The reason given to justify this measure was that the proximity of unconverted Jews served as a reminder of their former faith and seduced many conversos into relapsing and returning to the practice of Judaism.”

12 October 1492
Columbus enters the Western Hemisphere. Earlier in the year, Columbus had an audience with Ferdinand and Isabella in the Hall of the Ambassadors to request funding for his voyage.

11-13 May 1513
Ponce de Leon sails into Chequescha (Miami & Biscayne Bay). He names the land Florida and claims it for Spain. Antonio de Herrera’s 1601 text is the oldest record describing Ponce de Leon’s entry in Biscayne Bay. Below is a passage, translated by Florence P. Spofford. Bailly has inserted the likely contemporary names of places.

“On Sunday, the 8th of May, they doubled the cape of La Florida, which they named Cabo de Corrientes (Lake Worth Inlet), because the water ran so swift there that it had more force than the wind, and would not allow the ships to go for- ward, although they put out all sails. They anchored behind a cape close to a village called Abaioa. All this coast from Punta de Arracifes as far as this Cabo de Corrientes runs north and south a quarter by southeast, and it is quite clear with a depth of six fathoms; and the cape is in twenty- eight degrees and fifteen minutes. They sailed on until they found two islands (Virginia Key and Key Biscayne) to the south in twenty- seven degrees. The one having an extent of one league they named Santa Marta (Key Biscayne, and there they found water. On Friday, the 13th of May, they hoisted sail, running along the coast of a sandbank and reef of islands as far as the vicinity of an island that they named Pola (Key Largo), which is in twenty-six’ and one-half degrees, and between the shoal, the reef of islands, and the mainland, the open sea extends in the form of a bay. On Sunday, the day of the Feast of the Holy Spirit, the 15th of May, they ran along the coast of rocky islets ten leagues, as far as two white rocky islets. To all this line of islands and rocky islets they gave the name of Los Martires (The Florida Keys) because, seen from a distance, the rocks as they rose to view appeared like men who were suffering; and the name has remained fitting, because of the many that have been lost there since.”

1567
Christianity is introduced to Miami. In 1567, Governor Pedro Menendez de Aviles establishes a Jesuit Mission in Tequesta. Jesuit Francisco de Villarreal is in charge of the Tequesta Mission.

1569
“Spanish/Indian friendships were renewed when the brother of Tequesta, one of those that had been baptized in Spain (and given the name “Don Diego”) arrived back at his village on the Miami River, accompanied by Father Juan Bautista de Segura.” Swanson

“At the very point of Tequesta there enters into the sea a freshwater river, which comes from the interior, and to all appearances runs from west to east. There are many fish and eels in it. Alongside it on the north side is the Indian settlement that is called Tequesta. A settlement of Spaniards was established here in the year of 1567, which was abandoned later, in the year of 1570. They say it would be advantageous to build a fort there for the security of the ships that might have to come out of the (Bahama) Channel and because the land is good for settlement.”

1763
Florida becomes part of Britain. The remaining Tequesta at the mouth of the Miami River depart Miami with the Spanish. It is hypothesized a few may have resettled in the Everglades. The Tequesta, as a culture and people, become extinct.

03 September 1783
The Treaty of Paris ended the American Revolution, and Britain relinquished rule over the thirteen colonies. Florida returned to Spanish rule.
Treaty of Versailles 1783

22 February 1819
Spain and Florida sign the Florida Purchase Treaty, effectively ceding Florida to the United States in exchange for about $5 million in debt claims. The treaty would be ratified in 1821 and Florida would be formally admitted as a US territory in 1822 and as a slave state in 1845.

1874 Coup staged by Martínez Campos on behalf of Alfonso XII.

1875 Entry of Alfonso XII in Madrid

1898 Spanish-American War and Treaty of Paris

1975 Death of Franco Proclamation of King Juan Carlos I

1978 Constitutional referendum (6 December) Constitution sanctioned by H.M. the King on 27 December in Parliament Enters into force on 28 December

1995 Spanish presidency of the European Union (second half). The European Council of Madrid approves the name of the future European currency: the euro (15-16 December)

1996 General elections (relative majority for the PP). José María Aznar is sworn in as president before Parliament (3 May)

2000 General elections (victory with an absolute majority for the PP). José María Aznar takes the presidential oath of office before Parliament (25 April)

2002 Spanish presidency of the European Union (first half)

2008 General elections (victory for the PSOE with a relative majority). José Luis Rodríguez Zapatero takes the presidential oath of office before Parliament (8 April)

2010 Spanish presidency of the European Union (first half)

2011 General elections (20 November). Victory for the PP with an absolute majority. Mariano Rajoy takes the presidential oath of office before Parliament (20 December)