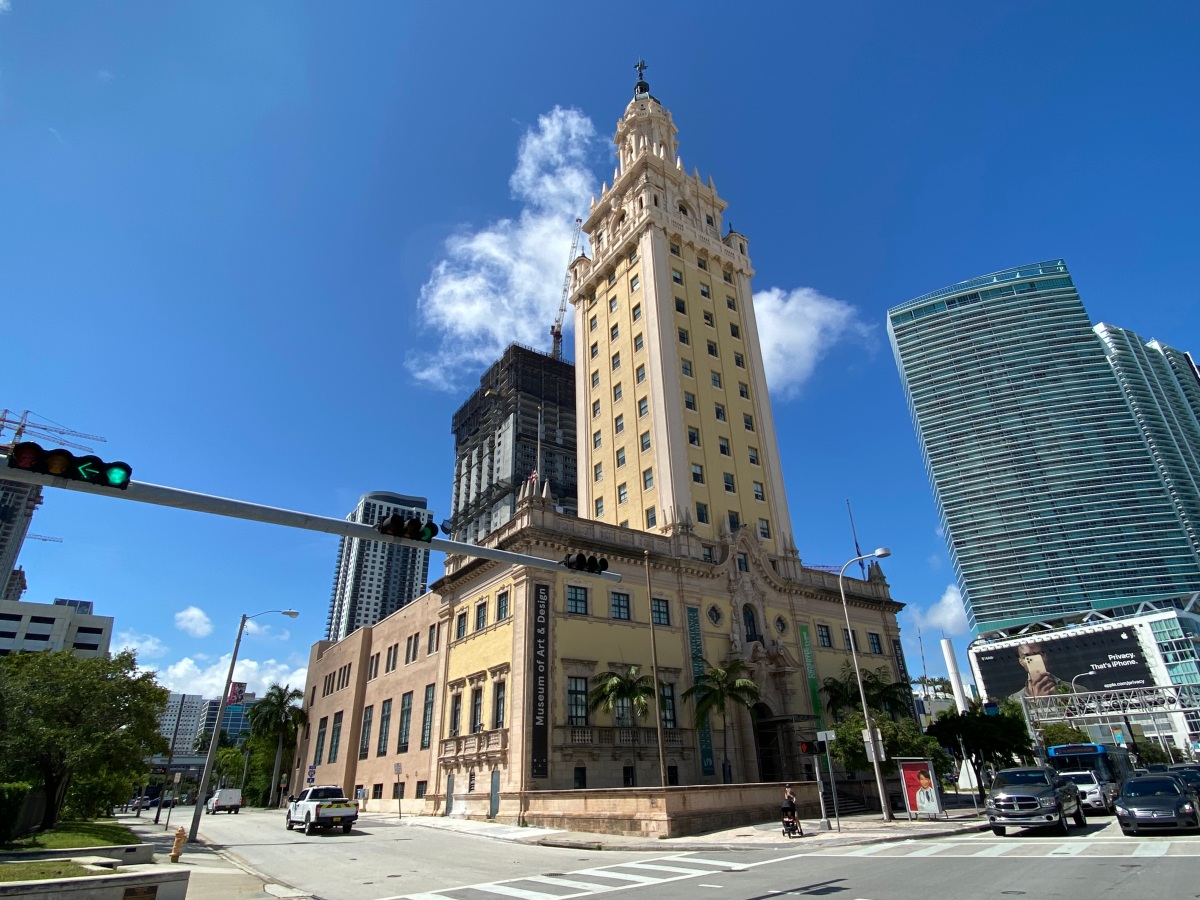 DESCRIPTION
The Freedom Tower stands as one of the most impressive monuments in the Miami skyline. Its design was inspired by that of the Giralda Tower in Seville, Spain, in its massing an^ composition, but using more renaissance detailing of the Spanish Plateresque. While the Giralda shows a progression from a Medieval design with Moorish details at the base, to Palladian and finally Baroque detailing at the top, in the Freedom Tower however, a unified design was possible. It is Renaissance in composition and detailing with the typical Spanish baroque abundance of detail at the entrance and at the top.

The Freedom Tower’s three part massing consists of a rectangular three story reinforced concrete-frame base, from which rises the twelve-story, steel frame tower. The-tower is-capped by a two-story cupola. A three-story rectangular mass behind the main body of the building once housed the Miami Metropolitan and News presses and loading docks. Although it retains the scale and fenestration of the front facade, it is devoid of architectural detail and is industrial in character. ’

The foundation of the Freedom Tower consists of twelve reinforced concrete footings, ten feet below the ground level, while under the rear wings a concrete slab, two feet thick is used.

Exterior walls are of concrete block, faced in pink stucco, with cast travertine used for ornamental details. This ^s a composition of native stone cast and colored to imitate travertine marble.

The entrance facade (east) is divided into three bays by four colossal, panelled pilasters with shallow quoins. The tWo central pilasters flank the frontispiece and serve as the visual support from which the tower rises.

A molded travertine water table defines the basement story while a similar molded belt course defines the sill line and bases of the shallow balconies of the piano nobile above.

Fenestration of the base of the Freedom Tower is regular, nine bays wide and three bays deep. The basement has awning window sashes set within shouldered arches. The large windows of the piano nobile are defined by shallow quoins and have jack arches with radiating voussoirs, projecting keystones and cornices supported by small consoles. The slightly projecting balconies at each window have balustrades also carried on corbelled supports. The third story window surrounds are comprised of croissets and shallow pediments with scroll motifs and consoles. All windows originally had double hung wooden sashes which were replaced with aluminum awning sashes in 1951. ‘ . r

The frontispeice is defined by two composite, travertine columns which support a large, bold swans neck pediment. Below this pediment a tall, roundheaded arched opening with foliated scroll spandrels and an elaborate escutcheon resting on a projecting keystone forms the main entrance, now a modern metal and glass double door. The archivolt has a continuous string of faceted squares and is interrupted by a molded impost block. The large escutcheon serves as a base for a small projecting wrought iron balcony for the center window of the third story.

The elaborate, detailed arched surrounds of this window, culminates in a capricious variation of a swans neck pediment. It is appropriately subdued when compared to the three-dimensional boldness of the frontispiece below. Decorative motifs include egg and dart molding under the pediment and cascades of fruit and foliage on the sides of the archivolt. The arch has a projecting keystone which in turn supports a cartouche. Finials adorn the supporting consoles and the pediment.

The entablature of the entire base has a dentilled cornice. The upward curve of the cornice responds to the pediment of the frontispiece and is carried through by the shouldered arch of the central window on the first story of the tower. A grill parapet tops the base and softens the transition from the horizontal mass to the first story of the tower.

The 11-story tower is three bays wide and three bays deep with a two-story set back at the 14th level of the building. The first nine stories of the tower have panelled pilasters with shallow quoins delineating the corners. The two-story set back is surrounded by a panelled parapet and has four square, open, corner pavillions with bell-cast copper roofs with finials.

Detailing on the 14th and 15th stories is more delicate than that of the frontispiece below. Two-story panelled pilasters, carrying a full entablature, create a triumphal arch motif on each elevation. Bas relief detailing is used in the spandrels and panelled archivolts. The entablature has a molded architrave, decorated frieze and dentilled cornice and responds to the center arch below. A large escutcheon is supported by the keystone of each arch. A roof balustrade caps this two-story setback.

A tall, slender octagonal tower rises from the 15th story. Eight blind arches with decorated spandrels and console keystones are flanked by engaged Tuscan columns. Bas relief shield motifs extend the height of the entablature which in turn responds to the engaged columns.

An octagonal drum, surrounded by an open gallery, supports a copper sheathed dome which, in turn, is capped by a belvedere also having a bell-cast copper roof and finial. The tower once served as a federal lighthouse with the belvedere containing three lamps, 300 watts each. The globe finial of the belvedere previously supported a weather-vane which was a model of a Spanish Caravel. Finials that once capped the gallery piers are now missing. 9

The two-story entrance lobby has a coffered ceiling. Opposite the main entrance are two elevator doors above which are stone bas reliefs depicting the workshops of Gutenberg, inventor of the printing press.10 Elaborate stairs with barrel vaulted ceilings lead to the lobby”s mezzanine. A mural on the mezzanine depicts an old map showing the Western World.H When the building was vacant and unattended, much of the art work and hardware was vandalized, the extent of damage undetermined. To prevent vandalism, the main entrance has since been filled with concrete block.

The ground floor offices of the Freedom Tower have poured concrete cross vaulted ceilings, resting on Composite Order columns. The interior is also notable for its use of handmade ceramic tile in myriads of colors and patterns which was imported from Spain, Africa, South America and Cuba. 13

Completed in 1925, the Freedom Tower obtains its significance from two distinct uses. From 1925 to” 1957, the building served as the offices and plant facility for the Miami Daily News and Metropolis, – Miami’s oldest newspaper. From 1962 to 1974, it functioned as the Cuban Refugee Emergency Center during which time the name “Freedom Tower” became associated with it.

Ip 1924, the renowned New York architectural firm of Schultze and Weaver was contracted by James M. Cox (owner of the newspaper) to design a new building to house the Miami Daily News and Metropolis. Cox, a former governor of Ohio and the Democratic candidate for the U.S. presidency in 1920, had purchased the newspaper in April, 1923. At that time the paper, which had been published since 1896, was known as the Miami Metropolis. The newspaper served Miami from this building then known as the News Tower, until September 1957, when it relocated its operations at 1001 N.W. Seventh Street.

Leonard Schultze and S. Fullerton Weaver, designers of the 283-foot high Miami News Tower, founded their firm in 1921. Prior to the partnership, Leonard Schultze supervised the construction of several buildings in New York City including the Grand Central Station (1903-1913), and the Biltmore and Commodore Hotels. Weaver had been president and owner of a construction company in New York. Before coming to South Florida, Schultze and Weaver, as a team, designed other well-known buildings throughout the United States, including the Los Angeles Biltmore, the Atlanta Biltmore and the Westchester Biltmore Country Club in Rye. New York. They, also designed the Seville Biltmore in Havana, Cuba. 4

Carl G. Fisher, the Miami Beach developer, lured the architectural firm to the area to design the Nautilus Hotel. With the successful completion of this building. Weaver and Schultze were awarded several other commissions in South Florida. The Miami-Biltmore Hotel and Country Club in Coral Gables (1925) (nr), the Roney-Plaza on Miami Beach and the “New” Breakers Hotel in Palm Beach (1925) (NR), which replaced the original Breakers destroyed by fire in the winter of 1924-5, were among their best known commissions.

Construction of the News Tower was-begun oh June 11, 1924. The construction contract was awarded to a New York contractor, George A. Fuller. John B. Orr of Miami handled the architectural details on the project. The approximate cost of the building was $2,000,000. 7

The News Tower was officially opened on July 26, 1925. To mark the momentus occasion, the Miami Daily News and Metropolis published the largest newspaper ever printed, a 504 page edition weighing 7-1/2 pounds, a record which stood for at least the next twenty-five years.

In September, 1957, the News Tower was sold to Irving Maidman, a New York realtor, for $1,250,000. The building remained vacant for the next 4-1/2 years until four floors were leased by the United States General Services Administration for use as the Cuban Refugee Emergency Center.

After Fidel Castro gained control of Cuba in 1959, many Cuban refugees emigrated to Miami. By 1961, more than 80,000 refugees were in Miami; they continued to arrive at the rate of 2,000 per week. To handle the influx of immigrants, the General Services Administration established a Cuban Refugee Emergency Center in the basement of the Dade County School Administration Building. To accommodate the steadily increasing number of immigrants, the Center had to relocate to the Florida State Employment Office. On April 19, 1962, the director of the Center, Marshall Wise, announced the transfer of the Cuban Refugee Center to the Miami News Tower. 14

On June 29, 1962, the Miami News Tower was renamed the “Freedom Tower” and was opened for business. 15 Three hundred government employees registered the refugees; verified their personal status and needs; issued relief checks (up to $100) and surplus food; gave medical check-ups and hospitalized those requiring immediate attention. The “Freedom Tower” also served as a clearing house for information about people who were permitted to emigrate to Cuba. Some one million inquiries regarding the status of friends and relatives in Cuba were handled through this facility.

Between February, 1961, and October, 1978 more than 450,000 Cuban refugees were registered through the Cuban Refugee Centers (another center, “Freedom Gate” was located near the Miami airport). A resettlement program was initiated, transporting refugees Chicago, New York, Los Angeles, Philadelphia and other American cities.

Due to the declining number of immigrants, the Freedom Tower Cuban Refugee Emergency Center closed in October of 1974. The building was, and still is, considered by the Cuban immigrants as a symbol of freedom and refuge.

The Freedom Tower has remained virtually vacant 1974. Sam Polur, a New York businessman, purchased the building in 1976, and offered to sell it to the entire Cuban community of Greater Miami at a low price. 21 Under the leadership of Cruz R. Rodriguez, funds would be requested from the Cuban community to purchase the building for use as a memorial, cultural and social center. However, the fund raising was abandoned by the Cubans and the Citibank of New York foreclosed on Polur’s mortgage in 1978. 22 Ownership of the building has been in litigation since that date.

Continuing the historical tradition of opening its doors to political refugees, the United States provided food, shelter and health facilities to those Cubans seeking sanctuary from Fidel Castro’s usurpation of power in 1959. In order to have enough space for these services, the federal government rented the old Miami News Tower on a yearly basis between 1962 and 1974. For the Cuban refugees in Miami and other parts of the United States, the “Freedom Tower” has become a symbol of this flight to freedom and welcome by the American people and has much the same symbolic meaning provided by the Statue ” of Liberty and Ellis Island for the immigrants of the 19th and early 20th centuries.